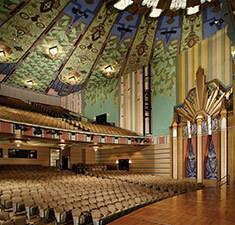 Fox Theater Wins National Preservation Award
The renovation of the Fox Theater in Spokane, Washington, has won a prestigious Preservation Honor Award from the National Trust for Historic Preservation. The award is bestowed on distinguished individuals, nonprofit organizations, public agencies and corporations whose skill and determination have given new meaning to their communities through preservation of the nation's architectural and cultural heritage.

"The Fox Theater is a community treasure and is a key part of the ongoing economic revitalization of Spokane's historic downtown," explains Stephanie Meeks, president of the National Trust for Historic Preservation. "Even when the Fox's stage is bare, the building's murals, plasterwork and light fixtures put on a show worthy of a standing ovation." 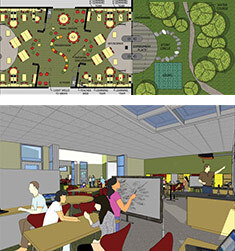 "Their classroom embodies the word connection. Students are connected to the earth, to the Internet, to one another, to their teacher – who can see them from anywhere in the room, even though it's a busy space," states Linda Perlstein, public editor for the Education Writers Association and author of the Educated Reporter blog for Slate. She adds that NAC Architecture "thought of just about everything in their entry: adjustable furniture, a messy art area, video screens large and small, communal areas for classes to share, carefully placed mirrors that allow for eye contact when a student and teacher sit at a computer together."
Read more
Trish Fineran, the teacher on the panel of judges, liked that the tables were on wheels and that the integration of spaces enables solo work as well as large and small group projects. While fifth-graders might not quite be ready to handle all the opportunities the room offers, if it were her class, Fineran explains, "They would gradually earn the right to move freely about the room and take more and more responsibility for working independently as they demonstrated responsibility to do so."
Slate will share NAC Architecture's entry with school and government officials interested in changing American classrooms.
NAC Architecture K-12 Thought Leader Greg Stack, AIA, LEED AP, was interviewed by American RadioWorks® about the firm's winning entry. The podcast can be heard at http://americanradioworks.publicradio.org/podcast.html
Read less 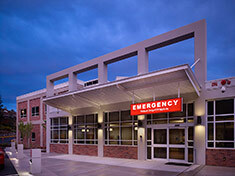 Highline Medical Center’s New Birch Wing Addition Opens
Highline Medical Center has opened a new $38 million, 75,000-square-foot building on its main campus in Burien, Washington, that houses a state-of-the-art Emergency Department and Patient Care Unit in order to meet the healthcare needs of the growing region. NAC Architecture designed the three-story Birch Wing, an addition to the existing hospital, to support a future vertical expansion of three additional floors. The Birch Wing houses a 27,000-square-foot Emergency Department on the main floor; a 21,500-square-foot, 31-bed Patient Care Unit for medical and cancer patients on the second floor; and a 27,000-square-foot parking garage on the lower level.
Read more
Designed to be converted to Laboratory and Imaging departments in the future, the parking garage features a public elevator with direct, 24-hour connection to the Emergency Department above. The Emergency Department contains 32 private exam/treatment rooms, including two major-trauma response rooms. The Patient Care Unit has 21 private rooms and five semi-private rooms as well as generously proportioned family activity and waiting areas.
Originally conceived six years ago in the master plan NAC Architecture completed for Highline Medical Center, the Birch Wing project generated significant support among community members, resulting in a successful fundraising campaign. NAC Architecture has designed many other projects for Highline Medical Center, including the Cedar Wing addition, and the Medical Pavilion and Cancer Care Center.
Read less

“We are very pleased to have been named a ‘Hot Firm’ once again,” Bruce E. Blackmer, president and CEO of NAC Architecture, explains. “It is always an honor to be recognized for sound fiscal management; however, numbers tell only part of the story. The true reward is the knowledge that this recognition reflects the same fiscal diligence that we apply to our clients’ budgets while delivering exceptional service and design excellence.” 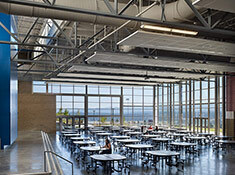 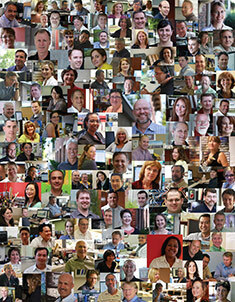 NAC Architecture Recognized as One of Top Two Places to Work Among Architects Nationwide
NAC Architecture has been named the #2 “Best Architecture Firm To Work For” in the U.S. for 2010 by ZweigWhite, a national management consulting and research firm, and engineering media specialists Stagnito Media. The annual list, on which NAC Architecture has previously been included, identifies outstanding employers based on their commitment to provide a positive work environment and challenging and interesting work opportunities for their staff members. The ranking is based on the results of a comprehensive survey of workplace practices and an independent survey of employees, with the final standing of the top three decided based on an intensive review by a panel of independent judges.

NAC Architecture was recognized for its “Leadership through Collaboration” corporate culture. Judges cited the firm’s development of a coaching-based professional development program last year to replace the annual review process. The new program focuses on goal setting achieved through mentoring rather than assessing performance and specifying corrective action. Judges commended the process that aligns individualized goal setting with NAC Architecture’s strategic plan.
Read more
“Good communication promotes transparency, participation, and empowerment, all of which facilitate the highly collaborative environment,” explains Nancy Usrey, FSMPS, CPSM, principal consultant, Partners Usrey, one of the judges. “Small discussion groups, brownbag lunches, and individual conversations helped manage the pulse of the firm. Aligning individual professional development with the strategic plan shows the employees how their successes affect the firm’s successes.”
Another judge noted the firm’s creation of thought-leadership positions in an effort to infuse new thinking into its design work and enhance career development. Pamela Britton, principal of The Knowledge Environment, states this “strong theme of institutional knowledge development, including its thought leaders and lifelong learning” catapulted the firm to the top of the ranking.
“This recognition is particularly meaningful because it is based, in part, on employees’ views on working for NAC Architecture, and by extension, for our clients,” Bruce E. Blackmer, president and CEO of NAC Architecture, explains. “It’s acknowledgement that our staff shares our vision to offer inspired design and extraordinary client service. Our employees are remarkable. We’re glad they value working for NAC Architecture because we value their dedication and creativity, which produce exceptional results for our clients and communities.”
Read the "2010 Best Architecture Firms To Work For" article published in the October 2010 edition of Structural Engineering & Design.
Read less 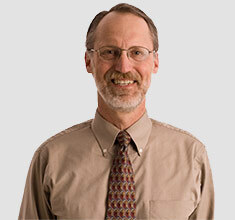 Colin Jones Appointed to Washington State Board for Architects
Colin R. Jones, AIA, CSI, LEED AP, has been appointed to the Washington State Board for Architects by Gov. Christine Gregoire. Jones, a principal with NAC Architecture, was recommended for the post by the American Institute of Architects (AIA) Washington Council. The board examines and licenses architects within the state, investigates violations of state regulations related to the practice of architecture, and recommends rules and regulations for administering the licensing laws. Jones, whose board term ends in June 2016, has been licensed as an architect in Washington state since 1989. A leader in the profession for sustainable design and professional development, he specializes in the technical aspects of architecture and how they apply to environmentally sensitive buildings. Jones possesses a wealth of knowledge regarding the AIA Intern Development Program that is invaluable to the board as it develops new rules in this area. 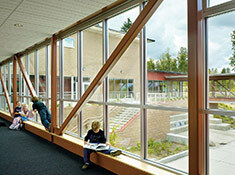 “To have broken into the top 100 firms is an inspiring achievement for us,” Bruce E. Blackmer, FAIA, president and CEO of NAC Architecture, explains. “We believe this ascent in stature affirms the success of our collaborative, client-centered design process and our commitment to design excellence. While this recognition is an honor, the true return on investment is that this achievement translates for our clients and the communities in which we live and practice our profession in the creation of architecture that enriches people’s lives.” 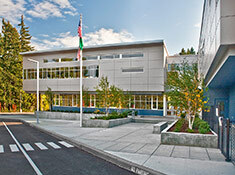 NAC Architecture Ranked in Top 100 by ARCHITECT
ARCHITECT magazine has released its ranking of the top 100 architecture firms in the United States, with NAC Architecture listed 63rd, having placed 90th the previous year. Firms were ranked based on caliber of design, sustainable practices, awards garnered in 2009, and fiscal responsibility. “We are very pleased to have advanced 27 positions in national ranking in a single year. It is especially gratifying when that recognition is based on criteria that emphasize design excellence and environmental stewardship rather than financial metrics alone,” explains Bruce E. Blackmer, FAIA, president and CEO of NAC Architecture. “We attribute this significant rise in standing primarily to our collaborative, client-engaging design process; the prestige and number of national design excellence awards won in 2009; and demonstration of our commitment to sustainability through 73 LEED Accredited Professionals on our staff. These factors have deep meaning for us as architects and as a firm; however, the real reward is knowing that they benefit every one of our clients as well as the communities within which we all live.” 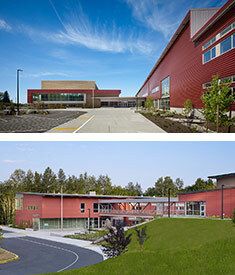 The AIA CAE Educational Facility Design Awards Program annually honors excellence in educational and cultural facilities. While showcasing and celebrating exemplary architecture for education, the program also identifies trends and emerging ideas and disseminates the best ideas and knowledge about educational facility planning and design to clients, architects and the public. 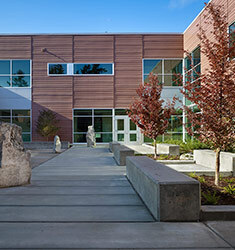 Eastgate Elementary School Honored with NSBA Citation
The National School Boards Association (NSBA) has awarded a citation to Eastgate Elementary School in Bellevue, Washington. The project was exhibited at the NSBA annual convention in Chicago in April. The NSBA noted that “the jury felt that this design supports education on many levels. The building and the outdoor learning environments it creates on a tight urban site are pleasantly and residentially scaled, making the campus particularly inviting. The interior and exterior appear to flow seamlessly together, encouraging active use of the formal and informal interior learning environments as well as three outdoor classrooms with many seating and landscape features that reinforce the curriculum. Inside, the small scale of the school is further reinforced through the creation of small, grade-level neighborhoods and the classrooms feature generous natural light. Finally, the materials of the building are warm and nicely detailed, further enhancing the daily experience of the students and faculty."

Staff Advancements
We are pleased to announce staff advancements.
Read more
^^ Back to the top